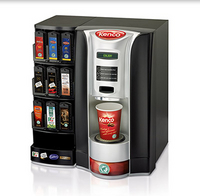 The history of the cup of coffee goes back many years. It was said that Japanese Scientist Satori Kato first invented the instant version of coffee in the early 1900s before Nescafe produced a more refined version of it, which quickly took the world by storm. This has been an ongoing development that the world has grown to love, where other brands have decided to get involved to offer their own versions of instant coffee.

Today there is a wide selection of instant coffee brands on the market, each with a story of their own. Brands like Nescafe have and Kenco coffee have developed blends of different coffees to create different aromas and flavours. Brands such as Kenco have also de.... Click here to read more

Kenco Coffee - Your No 1 Choice

Kenco Coffee, formerly known as the ‘The Kenya Coffee Company’ established itself in the UK, back in the 1920’s.  The Kenya Coffee Company was set up by a group of retired coffee planters.  It became a highly fashionable coffee house.  As they expanded they also started selling coffee to country estates advertising in exclusive publications such as Tatler, Country Life and the Times.